The dust has not settled in Uruzgan (Fred Smith), but it has definitely done so on the VetRide Great Vic. Bike ride for 2017. The skyline that developed over Tidal River during the afternoon of our first day was ominous. 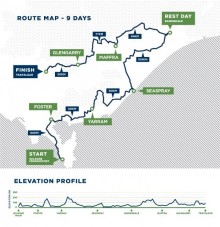 Nevertheless three thousand one hundred riders made the climb out of Wilsons Prom. and as became the pattern for every day of the ride thereafter, two of our current serving veterans showed the way. Seen here is one of them passing a more senior member of our team uphill. Go Darren. 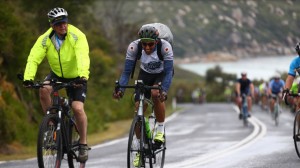 Wherever we rode the flying poppies were noticed and many in the group were repeatedly asked about its meaning and that of the word Passchendaele inscribed below – fancy that !

Each day presented a new personal challenge, in terms of both the terrain and the weather; however the completion of a days ride brought about a renewed sense of achievement and the joy of sharing the experience over a glass or two at the local RSL. 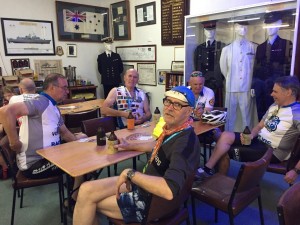 After a week of riding and a bit over 400k we were told of the upcoming storm ……….

We had made it as far as Maffra, but with the police escort recalled to Melbourne and 1500 kids in the ride, the event had to be cancelled. 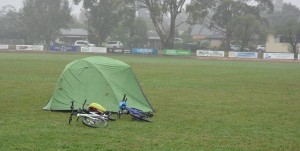 As one of our number quipped, it was a dramatic finish to a great (Vic) event.